How many golf balls are on the moon?

Two. There are two golf balls on the moon. Why is this a thing and how did I even think this is relevant? 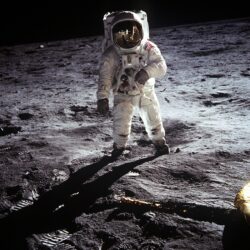 Well, I was thinking about how humans are really good at littering and thought hey I wonder if golf balls are lost in places unexpected? What could be more unexpected than “humanity’s signature litter” ending up in outer space!

How did golf balls end up getting off planet earth and who played golf on the moon? Let us go back to 1971 and the space race. During the Apollo 14 space mission astronaut Alan Shepard wanted to be more than the first American into space. He wanted to be the first, and so far only, person to play golf in outer space! The man smuggled a clubhead and a pair of balls abord the mission, attached the head to a rock collecter and had himself a good time. Here are his words as officially recorded by Nasa:
“Houston, while you’re looking that up, you might recognize what I have in my hand is the handle for the contingency sample return; it just so happens to have a genuine six iron on the bottom of it. In my left hand, I have a little white pellet that’s familiar to millions of Americans.”

Those two balls are still there today. As we enter a new age of space exploration and travel, I imagine others are going to want to drive a few balls into the great unknown of the universe. What a perfect place to use our biodegradable golf balls! Let’s not clog up the moon or mars with litter when a great alternative exists. I can see it now, Elon and Shatner driving a few biodegradable balls from a moon or a Mars base seeing who can drive them the furthest! I wonder if any of our customers have an in with a space agency, we could send a box up for testing!

Even if you don’t plan on leaving the planet’s atmosphere anytime soon, biodegradable golf balls are still a hit! Don’t mess up our ecosystem when you can still have fun driving balls and not ever have to worry about where they will end up or how they will impact the environment. 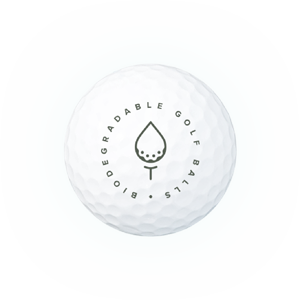 Drop Us A Line

This website uses cookies to improve your experience while you navigate through the website. Out of these cookies, the cookies that are categorized as necessary are stored on your browser as they are essential for the working of basic functionalities of the website. We also use third-party cookies that help us analyze and understand how you use this website. These cookies will be stored in your browser only with your consent. You also have the option to opt-out of these cookies. But opting out of some of these cookies may have an effect on your browsing experience.
Necessary Always Enabled
Necessary cookies are absolutely essential for the website to function properly. This category only includes cookies that ensures basic functionalities and security features of the website. These cookies do not store any personal information.
Non-necessary
Any cookies that may not be particularly necessary for the website to function and is used specifically to collect user personal data via analytics, ads, other embedded contents are termed as non-necessary cookies. It is mandatory to procure user consent prior to running these cookies on your website.
SAVE & ACCEPT